Monday, 1st March 2021 – Riders of Team Bahrain Victorious are looking forward to the three exciting Italian one-day races that mark every year’s early season. The highly motivated group of riders are well aware that the competition will be challenging and that all three races provide demanding challenges of their own.

The first of the three challenges will be the 58th edition of Trofeo Laigueglia on Wednesday, 3rd March. The course has a hilly middle part and ends with laps. One of the hills on the course is well known to riders from the Milan-San Remo race, but they will ride it in the opposite direction this time. The route is challenging for sprinters and not perfect for the climbers because they cannot achieve a sufficient gap. Mohorič, Bilbao, and Landa will all aim for a good position for the final sprint. Our sports director Gorazd Štangelj expects a challenging race with a small group of sprinters at the end. “It’s an important race because riding well at the beginning of the season can give a lot of confidence for future races. So we will fight for the podium. But there will be many good teams with strong leaders, which makes the race fast and difficult. No mistakes are allowed”.

The Strade Bianche held on the first Saturday in March will start and finish, as always, in Siena. Despite its short history, the race has already gained prestige. It is known as an early spring precursor to April’s cobbled classics. 184km long route over hilly terrain and on white gravel roads, characteristic of the Tuscan countryside, provides a unique challenge for our riders. A few short and technical parts of the course will be decisive, and the best of the best will fight to cross the finish line first. Our leaders for the race will be Mohorič and Bilbao.
Sports director Alberto Volpi outlined the team’s strategy: “It is a superior race of the WT calendar with 63 km of gravel on 11 sectors, so the Team will have to stay very focused. Our main goal is to work together as a team and focus on our leader Matej. We are also lucky to have Bilbao in the line-up, who will be very helpful. We have an excellent team, but we have to be proactive and aggressive right from the beginning.”

Just a day after Strade Bianche, on 7th March, the Gran Premio Industria e Artigianato will take place, an aggressive race fit for riders going to Tirreno Adriatico. The 43rd edition should have been held in March 2020 but was moved to the 2021 calendar due to the pandemic. The route consists of eight laps on two different ring roads around Larciano, with four laps on each street. The first road is 22.3 km long and relatively undemanding, while the second road is 27.5 km long and includes four ascents of the Fornello. Our leaders, fighting for the best sprint position, will be Mohorič and Landa.

Matej Mohorič will be among Team Bahrain Victorious’s leaders in all three races. “After we originally planned, I would start the season in Spain. My first race will now be in Italy. During the winter break, I worked harder than ever before and was determined to start the new season in the best shape,” says Mohorič.
His ambitions for all the three races are high: “Trofeo Laigueglia suits me well. The course has technical final laps with a slight climb that will make the selection. We also have a strong line-up with climbers for this race.
Strade Bianche is my favourite race of the year. To win in Siena has been my dream since I first saw the race on TV. This year I will pay extra attention to my equipment and hope for some luck after three flats last year. I hope to do well on the gravel sections and the climbs, arrive at the finish climb and fight for the win.
In 2018 I won in Larciano, and I will try to repeat that this year. The final kilometres are very technical, with a climb followed by a descent. I don’t think I will go for the same approach as the last time, and it might prove more challenging to surprise others.” 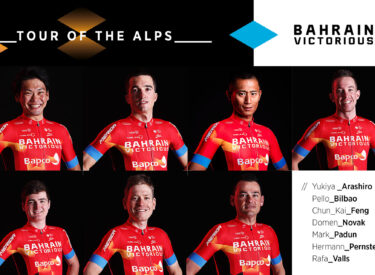