A challenging week for Bahrain Victorious at the 100th edition of the Volta Ciclista a Catalunya that covered 1,000km over seven days of racing. The team started the race with six out of the possible seven riders, and after Stage 3, down to five due to Domen Novak suffering from gastrointestinal issues.

Nonetheless, the team put the issues behind them, putting on a solid showing in Catalunya. Our young Columbian Santiago Buitrago went head to head with some of the big favourites and climbers of the WorldTour. The snowcapped Pyrenees climbs and Catalan roads were an excellent test and comeback for Wout Poels after an injury in UAE. While Hermann Pernsteiner and Stevie Williams showed good form throughout the race.

The race highlight came on the final stage with Matej Mohorič riding in the breakaway, ending as runner-up to Thomas De Gendt (Lotto–Soudal). While a win would have been great, the second place shows the strong form Matej is building ahead of upcoming races.

Sports Director Franco Pellizotti was happy with the improvement throughout the race: “It was much better than we started. All the guys improved day by day. We had Santiago for GC and four days in the breakaway, and finally, we took second place with Matej in the last stage. For the team, I think we finished very well, and we see a positive future.

We are happy for Wout because we arrived here after his crash in UAE Tour, which caused a big problem in his knee. He started here and improved day by day. For us, it was very important that Wout is in the team because he was a teacher for Santiago. We are happy about Wout’s improvement. I think he will be in good condition for the next races.

Also,  Hermann did not arrive here in super condition but improved day by day. He was also in the breakaway with Matej today. Finally, it was good for our team.”

Matej Mohorič was happy with his form over the seven days: “I came in good shape in this Volta a Catalunya with the goal to win a stage. I came close on 3 occasions, but it always slipped through my hands. It’s a little bit frustrating, but yeah, today was the most suited me, but De Gendt was just stronger. I could not do anything to hold his power. It’s still a good week of training before the Ardenne Classics. Amstel and Liege will be the two big goals; I hope to improve last year’s 4th place in Liege. I will recover now, and then I look forward to the next races.”

Wout Poels reflected on his first race back from injury  “First of all, I’m really happy that I could join the race to get some kilometres in the legs. I had no problem with the knee anymore. That is the most important thing.

We had a good week with the team. Unfortunately, Matej was really close to winning today. So for sure, he’s in good condition. He’s gonna hit some nice targets in the season. Personally, it’s a good week, and I am happy we are on the way back.

Now I go home for a few days, then we go with the team to Tenerife altitude camp, and then we go into the Ardenne Classics.”

In Belgium, Sonny Colbrelli finished 4th in a sprint finish at Gent Wevelgem. The 247km race battled strong winds from the off, and it wasn’t long till the peloton was split. A front group of 25 riders took an advantage over the bunch and caught the early breakaway with 150km to go. The front group were down to 9 riders with 50km and later dropped to 7 with 15km to go. It came down to a sprint for the line, with Sonny crossing fourth with the race favourite Wout Van Aert (Jumbo Visma) taking the win.

Sonny commented on the race, ” Today was a super fast and long day at Gent Wevelgem. I’m happy with my condition but not so much for the result cause I tried to win or take a podium. With 50m to go, I had no power in the legs. I’m happy with this race, and it’s an important race for me, and now I can focus on the Tour of Flanders”. 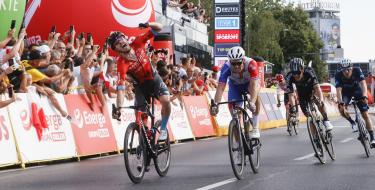