Damiano Caruso and Pello Bilbao were the main protagonists of Team Bahrain Victorious. Damiano Caruso had great support in the right moments from all of his teammates, especially from Pello Bilbao. The Basque rider kept his eyes on him in the right moments on the gravel sections. Then he supported him to keep his position with the Maglia Rosa group, where Damiano was able to move up four positions in the GC into third.

Team Ineos Grenadiers led the head of the peloton throughout the stage, working hard for Maglia Rosa, Egan Bernal (Ineos Grenadiers), who crossed over the finish line 3’09” adrift from the winner but gained more time against his GC competitors.

Damiano Caruso shared his thoughts after the considerable effort: “I’m super happy because today was a key stage of this Giro. It was a tough and complicated one. In the end, I felt good, although when Maglia Rosa went, I couldn’t follow him. But I think I did a good race anyway. I want to say a big thank you to the whole team, both staff members and riders. Now it’s time to recover from the stage. Then we will see day by day. We need to keep calm, and at this moment, I want to think only about recovering well.”

Pello Bilbao was protecting and helping the team captain throughout the race: “I discovered the white roads only this season when I rode “Strade Bianche” for the first time in my life. I must admit that it became my favorite race, and today I got the confirmation that I really enjoy riding on the gravel roads. Although it was a hard day and we had difficult situations, we tried to solve them together with Damiano, who did a great job. We did our race, and we controlled the situation in the best way possible.” 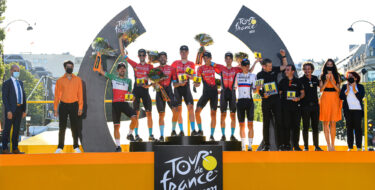