After nearly 219 kilometres from Kielce to Lublin, stage 1 of the 79th Tour de Pologne ended, as expected, in a bunch sprint. Phil Bauhaus, winner on the opening day last year, was beaten into second place on the line by a matter of centimetres.

Team Bahrain Victorious had been strong all day, chasing down the early breakaway, which lasted until 7kms from the finish; Jonathan Milan – returning to road racing for the first time since March – showed his strength on the front of the peloton, and riding on his home roads, Filip Maciejuk was also driving the bunch.

With just over 3k to go, Bahrain came to the front with Bauhaus in 3rd wheel and Milan at the head of the race. When the Italian pulled off 2k later, it was down to Heinrich Haussler to guide our sprinter into position for the finale.

Under the ‘flamme rouge’ the road was squeezed by barriers, and a large crash took out many riders including Stevie Williams who fell heavily. Meanwhile, Haussler and Bauhaus moved to the right hand side of the road anticipating the final corners before the finishing straight, and it was soon ‘mano a mano’ between the German and Jumbo Visma’s Olav Kooij. The 20-year-old held on by a tyre’s width to take his first world tour victory, but there were plenty of positives for our boys heading into another day for the sprinters tomorrow: 205.6kms from Chełm to Zamość.

After the stage, Bauhaus reflected on a good performance, “I think we did really well today – everything was controlled for the bunch sprint, with Filip chasing down the breakaway and Jonathan & Heino at the end leading me out. They did a really great pull in the front, then Heino for the last 700 or 800 metres so I could follow the Jumbo guys. I came close, and I was gaining metres on Kooij, but in the end, the finish line came a bit too early for me. The legs are good in the group so that’s nice to see, and we hope to do a perfect result in the coming days.” 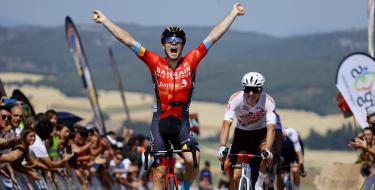