Bahrain Victorious to Volta a Catalunya

Bahrain Victorious is back at the Volta a Catalunya this year as the event hosts its 101st edition!

The World Tour race renowned as the third oldest cycling stage race in the world takes our riders on a route that starts in Sant Feliu de Guíxols 172.2 kilometre stage and finishes on the following Sunday in the Catalan capital with an exhilarating 138.6-kilometre circuit and navigation of the six final climbs at the iconic Castell de Montjuïc.

After tasting success in Ruta del Sol, Wout Poels will be looking for more of the same as the team head east to the capital of Catalonia. Joining Poels is Phil Bauhaus and Santiago Buitrago, both of whom have picked up early season stage wins in the Tirreno Adriatico and The Saudi Tour respectively. Alongside the three aforementioned riders, we have Sonny Colbrelli, Jack Haig, Hermann Pernsteiner and Dylan Teuns competing.

Phil Bauhaus and the field of sprinters will be zeroing in on Stage Five in particular as the longest stage of the week, clocking in at 206.3-kilometres, sees the racers go through Vilanova i la Geltrú – a stage that may end up pivotal in the general classification.

With a strong lineup on show, confidence is high. Here’s the thoughts of the Sports Director Xavi Florencio:

This Volta a Cataluyna is like last year’s as it’s suited to the climbers as two of the stages have long climbs and they both end in the mountains. We also have likely two or three stages where we will be expected to arrive in the sprint and the other two [stages] coming in the form of a breakaway.

We have a strong team, especially for the mountain stages, but we also have an opportunity on the flat sections with Sonny [Colbrelli] and Phil [Bauhaus] so our goal is to win one stage in the Volta a Catalunya and to push for general classification podium! 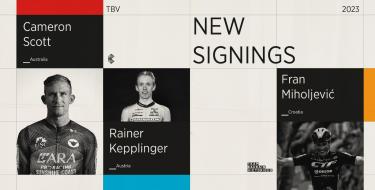