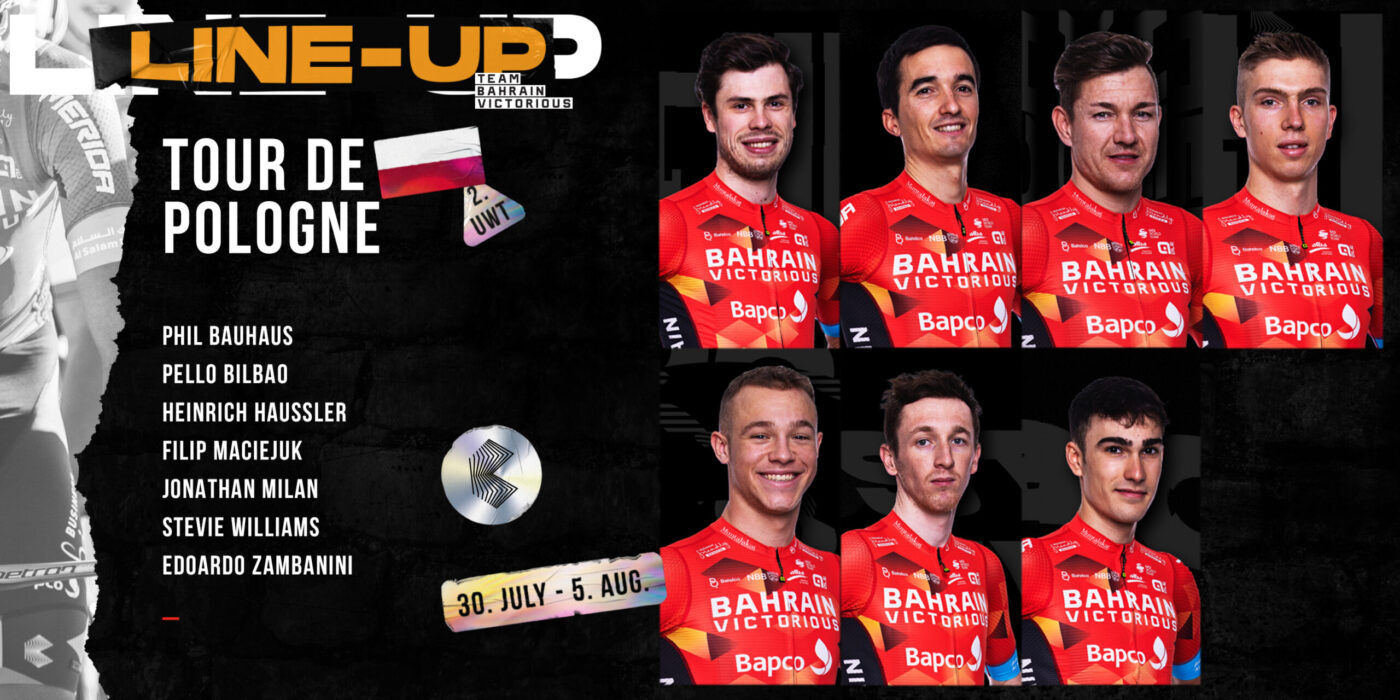 Just a few days after the Tour de France reached Paris, Bahrain Victorious are back stage racing at the 79th Tour de Pologne, which gets underway on Saturday in Kielce. The route is designed to attract both climbers and classics specialists, and we will be hoping to go one better than last year when Matej Mohorič finished 2nd overall.

The first 2 days should provide opportunities for the sprinters, but they include 4 categorised climbs, and stage 1 ends with a long uphill drag to the line in Lublin. Phil Bauhaus is looking to repeat his victory in the opening stage last year, and guiding him to the best position in the sprint finishes will be the experienced Australian Heinrich Haussler, who starts the race for the 7th time. Also leading out Bauhaus will be Jonathan Milan, returning to action also on road after a successful track campaign with his National Team, and making his Polish debut.

The longest stage of the week comes on Monday: 237.9kms from Kraśnik with 3 categorised climbs in the last 30k before a steep ramp in Przemyśl to decide the winner. This will be the first chance for the GC contenders to show their form. Leading Bahrain Victorious is Spaniard Pello Bilbao, already a double stage winner this season and a top 5 finisher in his last 3 races.

Supporting Pello in the mountains will be Stevie Williams and Edoardo Zambanini, both of whom have the potential to perform well on GC themselves. Lead Sports Director Enrico Poitschke comments,

“Pello Bilbao is the leader, with Stevie & Edoardo in support on the climbs and helping him in difficult situations on the hard stages. Pello is in good shape, he hasn’t raced for a long time but his preparation has been fine and we hope he can fight for a good result in the GC.”

Bilbao hasn’t raced since finishing 5th at the Giro d’Italia in May, having taken a break to be with his newborn daughter, and he is looking forward to making his Tour of Poland debut.

“It’s strange to be in a WT race for the 1st time after being a pro for 12 years. It’s going to be my first time in Poland, and I’m super curious to discover the country. I know it is very intense; you can break the race from far out, and it’s more open with classics style stages and short, explosive climbs.

For sure the time trial with more than 400m of elevation will be the key moment in the race, so let’s see if we get to the 6th stage in a good position and still with possibilities to fight for the overall. It’s going to be a great experience for sure.”

Completing our team for the race is Poland’s own Filip Maciejuk, fresh from his 4th place in the TT at the Polish nationals last month.

Stages 4 & 5 are both hilly days with plenty of climbing & descending on the profiles, but the key to overall victory may well be the penultimate stage TT. The riders will take on an 11.8km individual test against the clock, almost entirely uphill, and ending at the ski station of Rusiński. Poitschke says,

“Pello is a good time trialist so the focus will be on him, but also Stevie and Zambanini. They could also get a good place overall so we’ll see what the situation is before the Time Trial.

The goal is top 5 on GC and to win one stage, so hopefully, Phil or the climbers are strong enough to fight for a victory”

As is tradition, the week concludes with a stage to Kraków. It’s 177.8 hilly kilometres, with two early climbs which could decide the King of the Mountains before a predicted sprint finish in the city centre.