Some riders and staff of Team Bahrain Victorious had Police search their homes today before their departure to the Tour de France.

Team Bahrain Victorious always works based on the highest standards of professionalism in sports,  including the integrity of all professional members and competitors. The team cooperates constructively in all procedures and with all competent institutions. The investigation into the members of the team, which started almost a year ago and did not yield any results, continues just before the start of the most important cycling race, the Tour de France, and damages the reputation of individuals and Team Bahrain Victorious. Due to recent investigations, the team feels the timing of this investigation is aimed at intentionally damaging the team’s reputation.

After almost a year of unsuccessful efforts by the team to obtain additional information,  the investigators decided on new investigations just days before the start of the most important cycling race, which undoubtedly casts a shadow of doubt on the purpose of the investigation.

The team have always cooperated completely transparently with all competent institutions and will continue to do so in the future, with the hope of greater transparency and a sense of the independence of investigators, as well as equal treatment of all teams. 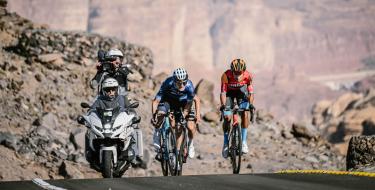 BUITRAGO 3RD ON THE QUEEN STAGE OF SAUDI TOUR, AS BILBAO MOVES INTO 2ND AT VALENCIANA